Save money and buy the 6 less common, but useful keys for the Hohner Marine Band Crossover Diatonic harmonicas with a Hohner Gig Case.

The classic Hohner Marine Band harmonica has a new sibling. The pro-quality Marine Band Crossover sports a quality laminated, air-tight bamboo Comb (reed plates are fastened to the comb with screws) that creates a great tone and ease of bending for blues, rock, country, hip-hop, or whatever style of music you play. Comes in its own black zippered pouch.

Dave Gage Review: One of the best sounding and playing diatonic harmonicas out of the box. Great for players of all levels and music styles and worth the extra money for the increased quality and playability. The sound is bright, but not too bright. It plays as well as expensive, customized harmonicas.

Due to the “Compromise tuning”, the chord playing is smooth and full and the single notes also play nicely in tune, so playing in positions other then 1st and 2nd is not a problem for intonation. Because of the air-tight construction (sealed comb and screws instead of nails to attach the reedplates), bending and overblows and overdraws are much easier then on most other diatonics. This is great news for beginners learning to bend and those speedsters and over-blowers out there looking for an air-tight harmonica that can keep up with their playing. 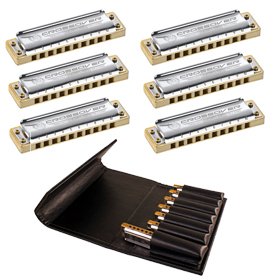